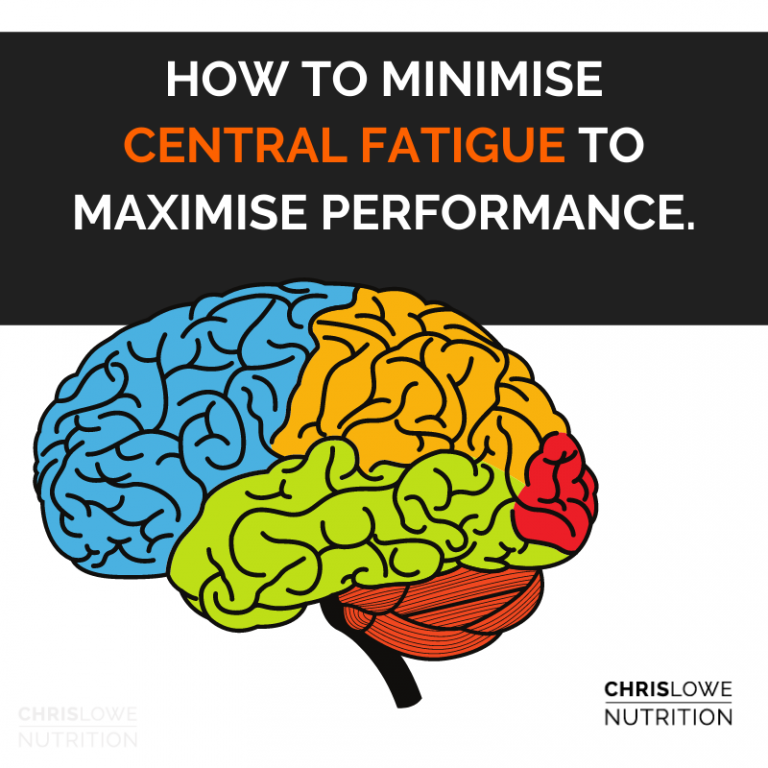 As mentioned on previous #D2EW episodes, the depletion of carbohydrate stores within the muscle is one of the main factors than causes fatigue in athletes.

When muscle glycogen (stored form of carbs) hits a critical level of depletion, the muscles contractibility and ability to produce force is impaired – this is one of the main contributors of peripheral (or local) fatigue. I.e. fatigue within the muscle.

However, there’s also another major branch in which we experience fatigue: Central fatigue. In other words, fatigue of the nervous system.

Interestingly, the impact of carbohydrates on the nervous system is less known. Therefore, can carbohydrates help support central fatigue by decreasing neuromuscular fatigue? I.e. muscle activation and the ability to produce force and power.

Carbohydrates can influence central fatigue by:

In light of this, Khong et al (2018) examined how eating four different meals of identical calories with different carb intakes prior to 90 minutes of running can offset central fatigue. Sixty minutes before their run, they consumed either:

After measuring a bunch of neurophysiological variables, they found that the high carb, high glycaemic index meal best preserved the muscles force generating capabilities through the preservation of central drive (muscle activation).

As you’d expect, the high carb, high glycaemic meal favoured a reduction in central fatigue by causing the exact opposite.

Long story short, a high carb meal that’s higher in sugar, lower in fibre is probably the best thing for athletes to eat before competition to maximise performance through reducing both peripheral and central fatigue. Winner!

CUT THROUGH ALL THE LATEST DIETING BS AND LEARN EXACTLY HOW I HELP PRO RUGBY TEAMS AND ATHLETES ON MY COACHING PROGRAMME ACCELERATE THEIR RESULTS. SUBSCRIBE TO MY NEWSLETTER AND CLAIM YOUR FREE NUTRITION GUIDE!