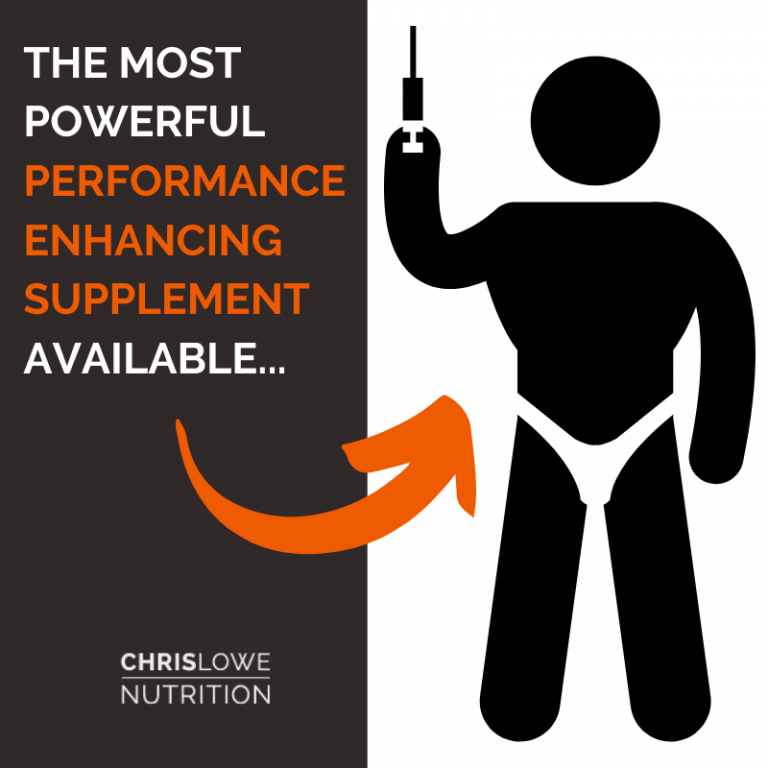 Today, we look at one of the most powerful performance boosters…

– Defined as someone having a positive outcome resulting from the belief that a beneficial treatment has been received, despite the treatment being inert. i.e. does fuck all.

For example, if someone you trust tells you something is going to work, it’ll work to the extent of which you believe it will.

Coaches have known about this for decades, and sometimes take advantage of this situation and deliberately use the placebo effect to get better performances from their athletes.

This (imo) isn’t a bad thing as it’s been suggested in medical research that we should maximise the placebo effect by harnessing a patients expectations and learning mechanisms to improve treatment outcomes (Enck et al, 2013).

That being said, this should only really be used once the medicine, supplement or food has some evidence to suggest it works…otherwise it’s not really manipulation, it’s lying.

You’ve probably heard ‘the placebo effect’ thrown around in one way shape or form, however, how much of an impact does it actually have on sports performance?

1. They recruited 11 national level powerlifters.
2. Each powerlifter performed baseline testing in the squat, bench and deadlift.
3. After the baseline test, they gave all powerlifters a placebo…but told them it was a fast acting steroid.
4. Non-surprisingly, their numbers in the squat, bench and deadlift improved by 3.2-5.2% in just one week when they retested.
5. The following week, they maxed out on the 3 lifts (test 3) – however, half of the group were told that they’ve deceptively been given a placebo…their numbers immediately dropped and they saw them match their ‘pre placebo’ testing.
6. The remaining 5 powerlifters who believed they were still taking a fasting acting steroid further increased strength by 3.2-4.4% that week.

This is simply one example of many, but it does go to show how powerful your belief in something or someone impacts your performance…

You can name any bullshithousery supplement on the market that clearly doesn’t work, but if you think it will and buy into its proposed claims, you’ll see an improvement.

Your mind is a powerful thing.

CUT THROUGH ALL THE LATEST DIETING BS AND LEARN EXACTLY HOW I HELP PRO RUGBY TEAMS AND ATHLETES ON MY COACHING PROGRAMME ACCELERATE THEIR RESULTS. SUBSCRIBE TO MY NEWSLETTER AND CLAIM YOUR FREE NUTRITION GUIDE!